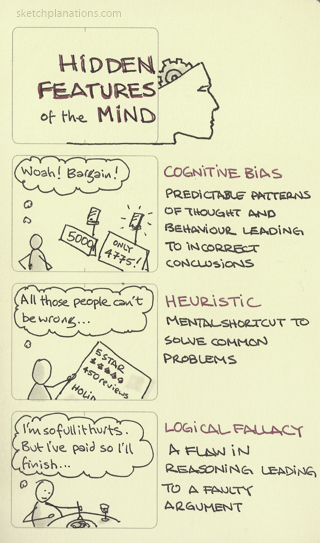 These terms come around a bit, and I wanted to get them clear in my head so I understood the difference.

Cognitive bias: predictable patterns of thought and behaviour leading to incorrect conclusions. Things like anchoring, where we are predictably led astray by the presence of a previous number we have seen.

Heuristic: mental short-cut to solve common problems. Things like social proof, how if others seem to like something that’s a short-cut for we’ll probably like it.

Logical fallacy: a flaw in our reasoning leading to a faulty argument. Things like the sunk cost fallacy, where we will sometimes make ourselves unhappy in the future because of something we’ve already done that we can’t change. The logical step would be to choose the path that would make you happiest in the future regardless of any sunk costs up to now. Turns out that’s hard.

HT: You are not so smart